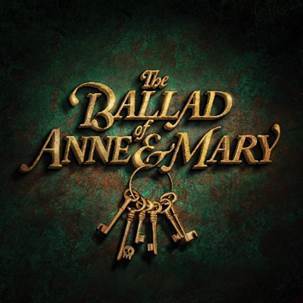 It’s 1721, and London is abuzz with news of notorious pirates Anne Bonny and Mary Read, currently languishing in Newgate Prison. It’s the perfect time for debt-ridden journalist Nathaniel Mist to exploit the public appetite and ghost-write a sensational (and hopefully best-selling) history of pirates. But as the balladeers and gossips on the streets of London build myths around the blood-thirsty, perverse lady pirates, Mist is forced to reckon with the real Bonny & Read…

Gritty and romantic, The Ballad of Anne & Mary whisks listeners away on a rollicking adventure across the Caribbean seas, through the backstreets of Georgian London, and into the cells of its most notorious prison. Original songs fuse sea shanties and pirate songs with orchestral and rock instruments to create a musical world at once familiar and surprising. Recorded in home studios during a year when the world stood still, this is the perfect escape across time and space, drawing you into the jaw dropping world of Anne Bonny and Mary Read, two of the most notorious pirates who ever lived.

Long Cat Media’s writer and director, Lindsay Sharman, comments: “We are thrilled to bring this musical podcast to life and continue to make epic stories without compromise. It has been great to see Anne Bonny and Mary Read’s resurgence in notoriety recently as their story illustrates resilience and joie de vivre we could all aspire to. We came across the non-fiction book Captain Charles Johnson’s A General History of the Pyrates from 1724 which became the basis for much of our modern mythology about pirates. The more we researched Mary Read and Anne Bonny’s story, the more ours came to life. The music in this podcast series transports you to other worlds, and there is something about the nature of folk music, especially shanties and sea songs, that we’ve always found exciting.”

Christina Bianco, who steps into the role of Anne Bonny, commented: “Listeners are in for something incredibly special. It is a female driven, action-adventure musical – which is a rarity! Not only does it have a gorgeous score and a script that is both hilarious and touching, but Long Cat Media have created an immersive sound design that makes you feel like you’re living inside the story. Oh yeah – and it was all done in isolation! It’s an absolutely stunning achievement that I am honoured to be part of.”

Sooz Kempner, playing Mary Read in The Ballad of Anne & Mary, added: “If you would have told me two years ago that a full-blown musical could exist in podcast form, I’d never have believed you. But this is exactly that, and it’s about two badass women to boot.”

Exploring how legends are made, and why the truth rarely gets in the way of a good story, The Ballad of Anne & Mary is a celebration of rebels, the environment that made them, and how they become a repository for our fears and desires. Looking back from a time when rule-breaking women are still demonised by the media and by the public, what must it have been like in 1721?

The Ballad of Anne & Mary is written and directed by Lindsay Sharman, with music by Laurence Owen and an incredible cast including Carole Stennett, Dominic Brewer, John Henry Falle, Hayley Evenett, James Ducker, Colette Boushell, Ivan Wilkinson and Helen Fullerton. It has been supported by funding from Arts Council England and the UEA Enterprise Fund.

The Ballad of Anne & Mary will be launched on 29th April on all major podcast platforms including Apple Podcasts, Spotify, Acast and Google Podcasts as well as on www.longcatmedia.com, with new episodes being released every Thursday. The soundtrack will be available to buy on Bandcamp. You can watch the series teaser trailer here.