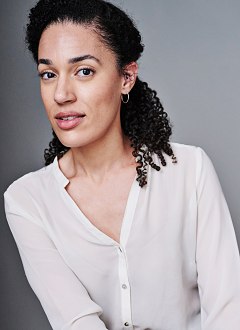 Aamira Challenger stars in the forthcoming stage adaptation of the classic Ealing Studios comedy, The Lavender Hill Mob. I caught up with Aamira to find out more about the upcoming UK tour.

Can you tell me about The Lavender Hill Mob?
The Lavender Hill Mob is a stage adaptation of the 1951, classic Ealing Studios comedy. Set in a member’s club in Rio, Henry Holland reminisces about his plot to steal a van full of gold bullion with his partner-in-crime, Pendlebury. Chaos ensues…

What attracted you to the production?
I think that the film, written by T.E.B. Clark, is hilarious! So, when I read Phil Porter’s adaptation, and it had me laughing out loud, I knew I wanted to be part of the production. It’s fast-paced, all-hands-on-deck storytelling with heart. Simply thrilling.

How would you describe your character?
I play Fernanda, the owner of the club. She’s enthusiastic, charming, and keen to make sure everyone feels welcome; although, she’s definitely not to be crossed.

How excited are you to be touring with the show?
I’m very excited to take this show on tour and have audiences across the UK join us. We’ll be visiting some places that I’ve not been to before and I’m looking forward to returning to some familiar venues.

How have rehearsals been going?
We’ve been having a lovely time and working very hard (between fits of laughter). Director, Jeremy Sams, has such a joyfully dynamic vision for the show it’s hard not to have fun. It’s also been wonderful to have members of the creative team dropping in to share some inspiration and expertise.

What can audiences expect?
There’s something for everyone, whether they know the film or are new to the story, it’s a real feel-good vibe. Expect a jolly good time and a little bit of magic!

The Lavender Hill Mob tour kicks off next week. For more information on dates and to book, visit https://lavenderhillmobplay.co.uk