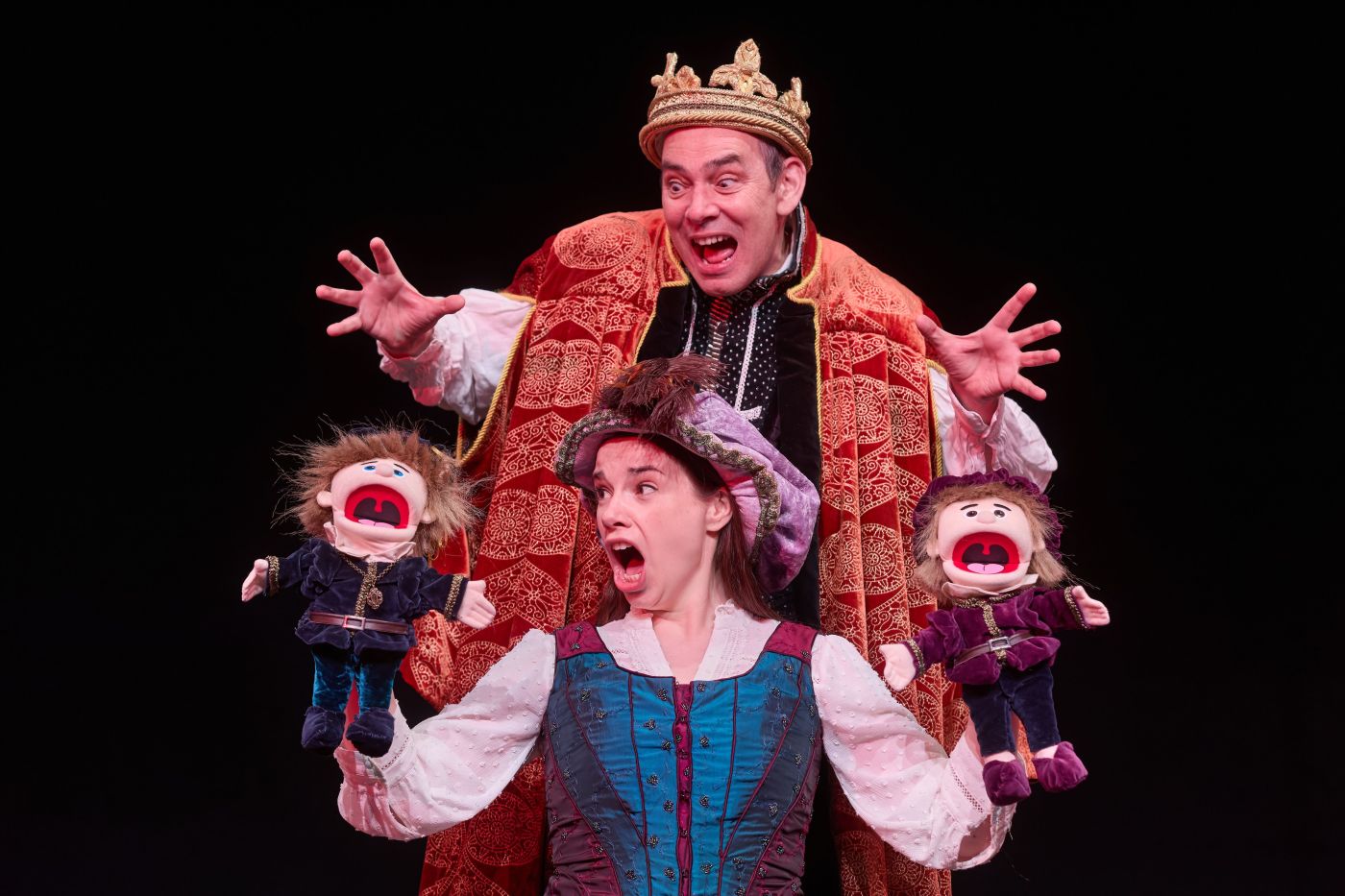 A series of best-selling series of books and an equally popular television show, tHorrible Histories is taking over London this summer. Not only has creator Terry Deary along with the Birmingham Stage Company commandeered the Thames with a boat cruise, they’ve also made the Garrick Theatre their home this summer for live show Horrible Histories – Terrible Tudors.

Written by Deary and the Birmingham Stage Company’s Neal Foster (who also directs) the show – as the name suggests – takes the audience on a whistle stop tour through Tudor History, beginning with the end of Richard III’s reign and ending with the death of Elizabeth I in 1603, signalling the end of the Tudor dynasty. Over the course of 70 action-packed minutes, Dr Dee and Drabb (played by the brilliant and enthusiastic Ben Martin and Emma Swan respectively), with the help of some sound effects, tell the story of those who ruled over the years, including Henry VII and his victory over Richard III at the Battle of Bosworth, Henry VIII and his six wives. Edward VI, ‘Bloody’ Mary I and Elizabeth I. Armed with an array of costumes, puppets and small props the pair don’t falter – and barely pause for breath – as they switch costumes at lightning speed and take on the many characters involved.

Like the books and television series. Horrible Histories – Terrible Tudors is packed full of mischief, mayhem and some of the nastier moments in history which you may not have been taught at school. Whilst there are moments in the show that aren’t entirely accurate (as much as I’d love to imagine Henry VIII and Ann Boleyn squaring up to one another in a rap battle), it is incredibly interesting and a great way to engage young people with history. It’s also encouraging to see some of England’s darker moments explored, from the cruel way Henry VIII treated his wives to Elizabeth I’s links to the slave trade. What’s so impressive is that despite a lot of history being covered in such a short space of time, the show never falters and Neal Foster’s direction ensures it keeps its momentum throughout.

The seemingly endless and impressive array of Tudor-inspired outfits are courtesy of designer Jacqueline Trousdale and demonstrate the fashion of era well. Likewise Jason Taylor’s bold lighting is visually striking, switching from bright blue, purple, orange and, of course, red when someone meets an unpleasant end.

Younger members of the audience (the guidance recommends the show for people aged from 5-100) seemed enthralled during the show, laughing along (particularly at the toilet humour), joining in whenever the characters encouraged panto-like participation, and singing along with the very (very) catchy songs. There’s a particular tune sung to help the audience remember the fate of Henry VIII’s wives (‘Divorced, Beheaded, Died, Divorced, Beheaded, Survived), and while it might not be quite in the same league as the songs from musical Six – or songs from the Horrible Histories television show for that matter – it is still in my head as I write this review). There’s also plenty of content to keep the adults entertained too, with the odd political joke as well as impressions from Monty Python, Kenneth Williams and Nessa from Gavin and Stacey. For the most part this is a fun and clever show, although parents without deep pockets might not be too impressed with a blatant plug at the end of the show for the Terrible Thames boat cruise.

If you’re looking for a way to keep your children entertained during the school holidays, it’s certainly worth paying a visit to the Garrick Theatre this summer. Horrible Histories – Terrible Tudors is slick, witty and a fun-filled history lesson for the whole family.

Horrible Histories – Terrible Tudors is playing at the Garrick Theatre until 3rd September.